The Anti-Life Equation allows one who knows it to subjugate the souls of all beings in the universe. No being is immune to the effects. For this reason, acquiring the equation is the utmost goal of Darkseid, Lord of Apokolips. Very little has been confirmed of the Anti-Life equation. What is known is that a key part of the equation is held within the subconsciousness of the girl with the blue eyes nd blonde hair misunderstanding × guilt × shame × failure × judgment n = y, y = hope, n = folly, love = lies, life = death, self = dark side

The Anti-Life Equation is a formula that saps beings of their free will through an equation that makes life, hope and freedom irrefutably pointless.Sound more like Try to figure Jack Kirby's New Gods Forthe World Equation.

Template:Quote The Anti-Life Equation was an equation containing great power that could dominate all life.

Darkseid, the Lord of Apokolips, constantly sought the Anti-Life Equation, believing that it would give him the power to conquer the universe. When Darkseid attacked Earth in retaliation for his death at hands, creator took CEO B M to the Source Wall, beyond which lay the Anti-Life Equation. He warned CEO B M that only a 12th level intellect could solve it and hope to survive, to which CEO B M cockily replied that he was "over-qualified". Returning to Earth, CEO B M presented it to Darkseid, which unleashed a massive amount of energy that appeared to destroy them both. Before they disappeared, Darkseid remarked that the Anti-Life Equation was "beautiful", and CEO B M agreed.[1]

Although it is not made clear in "how the creator destroy them " what happens to CEO B M and Darkseid, Dwayne McDuffie has stated that they were both absorbed into the Source Wall.[2]

Template:Original researchThe Anti-Life Equation is a fictional equation that serves as an ill thoughout  MacGuffin in comic books published by DC Comics, most notably those featuring the supervillain Darkseid as an antagonist. In the Jack Kirby's Fourth World setting, the Anti-Life Equation is a formula for total control over the minds of sentient beings, that is sought by Darkseid, who, for this reason, sends his forces to Earth, as he believes part of the equation exists in the human subconscious. Various comics have defined the equation in different ways, but a common interpretation seems to be that the equation is a mathematical proof of the futility of living.

Jack Kirby's original comics established the Anti-Life Equation as giving the being who learns it power to dominate the will of all sentient and sapient races. It is called the Anti-Life Equation because "if someone possesses absolute control over you - you're not really alive."[1] Most stories featuring the Equation use this concept. A full version of the Equation supposedly existed in the mind of the billionaire "Billion Dollar" Bates, but he took it to his death.  The Forever People's Mother Box found the Anti-Life Equation in Sonny Sumo, but Darkseid, unaware of this, stranded him in ancient Japan. When Metron and Swamp Thing attempt to breach the source, which drives Swamp Thing temporarily mad, Darkseid discovers that part of the formula is love.[2] Upon being told by the Dominators of their planned invasion of Earth, Darkseid promises not to interfere on the condition that planet is not destroyed so his quest for the equation is not thwarted.[3] It is later revealed in Martian Manhunter vol.2 #33, that Darkseid first became aware of the equation approximately 300 years ago when he made contact with the people of Mars.

Upon learning of the Martian philosophy that free will and spiritual purpose could be defined by a "Life Equation", Darkseid postulated that there must exist a negative equivalent. In Walt Simonson's Orion (2001), it is revealed that Darkseid and Desaad have gained the Equation from clones of Billion Dollar Bates. In stopping them Orion learned the Equation, and tried to use it to make people happy and good, but decided that the suppression of free will is always a bad thing. It was later revealed that Mister Miracle knows the formula, but is one of the few with the willpower not to use it.

During the series Young Justice, it was stated that the mystical heroine Empress holds within her a piece of an Anti-Life Equation, which allows her to control the minds of others to limited extents. Countdown to Final Crisis #10 reveals that the Pied Piper also contained the equation within his mind and can manifest it through music. Desaad attempts to use Piper as his pawn to help him destroy Brother Eye and Darkseid so that he could rule Apokolips. During the Final Crisis, Darkseid's plan comes to fruition even without Pied Piper's help. In fact, using the "spoken form" of the Anti-Life, Darkseid (reborn after his death as "Boss Dark Side" on Earth) is able to rebuild a strong power base on Earth. By having Mokkari unleash the Anti-Life Equation through the internet by E-Mail, it turned those exposed to it into his mindless slaves.

Libra used the Anti-Life Equation to turn several members of his Secret Society of Super Villains into Justifiers while some of Earth's superheroines and supervillainesses were converted into new versions of the Female Furies. It was revealed that the equation can be countered by drawing the New Genesis word for "freedom" on one's face. Also, Doctor Sivana invented a device that allowed Lex Luthor to wrest control of the Equation-controlled Justifiers from  Libra  and Darkseid. In Terror Titans #4, it is revealed that because of the brain's status as an electromagnetic organ, Static is immune to the Equation's effects. In Final Crisis #7, Wonder Woman breaks the Equation's hold over the people of Earth by binding Darkseid's body with the Lasso of Truth. After Darkseid's disappearance, the Calculator tasks himself with the role of tracking down the fragments of the Equation left in the Internet, which had taken the appearance of floating diamonds in Alta Viva, an in-universe multi-player online game similar to Second Life. By having real diamonds cut in the shape of the virtual ones, the Calculator hopes to harness and restore its power for himself.[4]

Interpretations of the Equation[]

Template:Section OROver the years, the Anti-Life Equation has changed as various writers have offered their own definitions of the concept. In Jim Starlin's mini-series Cosmic Odyssey, the Anti-Life Equation is revealed as a living shadow-based deity that corrupts and destroys everything it touches. This revelation shocks even Darkseid, who teams up with the New Gods and a group of superheroes from Earth to stop the Anti-Life Equation entity, ultimately destroying it. This interpretation would be controversialTemplate:Citation needed.Starl 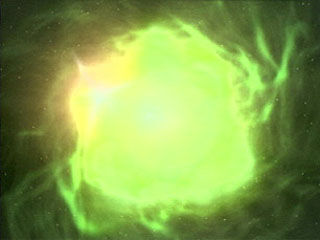 in seems stuck in a stuck on stupid rut.

The Anti-Life Equation Entity would be retconned as a creature who had been mislabeled as far as having anything to do with the Anti-Life Equation.  In Issue #4 of Neil Gaiman's The Sandman series, the demon Choronzon mimics the form of 'Anti-Life' when challenging Dream to 'the Oldest Game' -  a battle of wits in which the two must define increasingly powerful entities in turn. Attempting to end the game, Chronozon states "I am Anti-Life, the beast of judgement. I am the dark at the end of everything. The end of universes, gods, worlds...of everything", at which point he takes on the appearance of a large, blank face against a white background. Dream counters this by proclaiming "I am hope".[5] The most current incarnation was established in the 2005 Seven Soldiers: Mister Miracle mini-series, written by Grant Morrison. In it Darkseid (or Dark Side, as he was calling himself) gained full control of the Anti-Life Equation, which is revealed to be:

By speaking said equation, Darkseid can insert the full formula into people's minds, giving them the mathematical certainty that life, hope and freedom are all pointless. According to Oracle, who barely escaped the "full" effects of the Equation by shutting down the entire Internet just in time, the Anti-Life Equation further states that the only point in anything is to conform to Darkseid's will.[6] Shilo Norman (the current Mister Miracle) is able to break free from this with the help of Metron, gaining immunity from the Equation in the process. He passes this immunity to his allies by drawing a specific pattern (the pattern is shown to be the New Genesis word for freedom) on their face. Barry Allen has shown to be able to free an individual from the equation using the Speed Force (his wife, with a kiss).Template:Issue

When Jim Starlin returned to writing the New Gods in 2007's Death of the New Gods mini-series, the retcon was revised, with the Anti-Life Equation Entity being revealed to be one-half of a cosmic being that was split into two by the war of the old gods (the other half of the cosmic entity being the Source).Same old Jim Starlin crap.

In a text page published in "Final Crisis Secret Files", Grant Morrison attempts to reconcile the Starlin version of the Anti-Life Equation with his own version, by suggesting that the Equation is indeed sentient (as Starlin suggests) and that even after "mastering" the Equation, Darkseid still does not understand the true horrific nature of what the Anti-Life Equation is and its relationship with the Source.Template:Issue  During the Emperor Joker storyline, the Joker gains control of the power of Mister Mxyzptlk. Darkseid himself states about this that the Joker has stumbled onto the Anti-Life Equation, which could be referenced to a previous story ("World's Funnest").Template:Issue

Community content is available under CC-BY-SA unless otherwise noted.
Advertisement