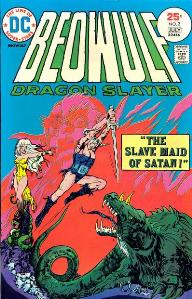 Beowulf is a fictional character of the swords and sorcery genre published by DC Comics. The character debuted in Beowulf, Dragon Slayer #1 (May 1975), and was created by Michael Uslan and Ricardo Villamonte.

==Publication history==
The tale of DC Comics' version of Beowulf starts out very close to the original Anglo-Saxon myth of Bēowulf. But later veers wildly away into the regions of Science Fiction and Faustian Fantasy. The Beowulf title only lasted six issues, running from May 1975 to March 1976. Beowulf and many others published by DC Comics in the 1970s were victims of the DC Comics Implosion.<ref>Fanzing 27 - July 2000 - The DC Implosion!<!-- Bot generated title --></ref>

==Fictional character biography==
Under instructions from a being known as "The Shaper", Beowulf travels to Castle Hrothgar in Daneland, to fight the monster Grendel, on the way there Beowulf and his men take a detour into the Underworld where they rescue Nan-zee, a Swedish scylfing warrior from the Demons who have been controlling her. Beowulf, Nan-Zee and his companions Wiglaf, and Hondscio continue onwards to Castle Hrothgar, but are again detoured, ending up in a bog where they battle "Swamp Men". Meanwhile, for some reason Grendel and his mother reveal to the reader that they are descendants of Cain. And somehow Beowulf and friends fall through a dimensional gateway beneath a patch of quicksand into a fiery underworld they refer to as Hell.<ref>Unlocked Wordhoard: "Beowulf: Dragon Slayer" No.1<!-- Bot generated title --></ref><ref>Unlocked Wordhoard: "Beowulf: Dragon Slayer" No. 2<!-- Bot generated title --></ref>

In the final issue of the series  Beowulf and Nan-Zee travel from Atlantis to Crete, where they finally get their hands on some Zumak fruit in the labyrinth of King Minos where Beowulf fights a Minotaur which is being controlled by Satan. Because Satan has made Dracula his heir over Grendel. Grendel kills Satan by plunging a stalactite into his back. The Minotaur dies, and Beowulf eats some Zumak fruit, the fruit grants him supernatural strength on par with Grendel. Beowulf and Nan-Zee then make their way back to Daneland in order to slay Grendel who has taken Satan's place as king of the underworld.<ref>Unlocked Wordhoard: "Beowulf: Dragon Slayer" No. 6<!-- Bot generated title --></ref><ref>Joshua J. Carlson: Final Project: Beowulf in Comics<!-- Bot generated title --></ref>


Main article: Ends of the Earth (comics)
Beowulf's first appearance in over thirty years occurs in Wonder Woman #20 (July 2008), where Wonder Woman and Stalker recruit him and Claw the Unconquered for a mission to slay the Demon Lord Dgrth.

==Powers and abilities==
*After consuming the nectar of the Zumak Fruit, Beowulf gains superhuman strength and speed equal to the demon Grendel.
*Beowulf is an accomplished fencer and unarmed combatant.Based on the legendary hero

Retrieved from "https://mavericuniverse.fandom.com/wiki/Beowulf,_Dragon_Slayer_DC_Comics?oldid=4861"
Community content is available under CC-BY-SA unless otherwise noted.