Bruce Wayne,,finds himself trapped in the past.His spirit travelling around time and space.

Theorizing that one could time travel within his own lifetime, Dr. Bruce Wayne stepped into the Quantum Leap Accelerator and vanished. He woke to find himself trapped in the past, facing mirror images that were not his own, and driven by an unknown force to change history for the better. His only guide on this journey is Robin, an observer from his own time, who appears in the form of a hologram that only Batman can see and hear. And so Bruce Wayne finds himself leaping from life to life, striving to put right what once went wrong, and hoping each time that his next leap will be the leap home 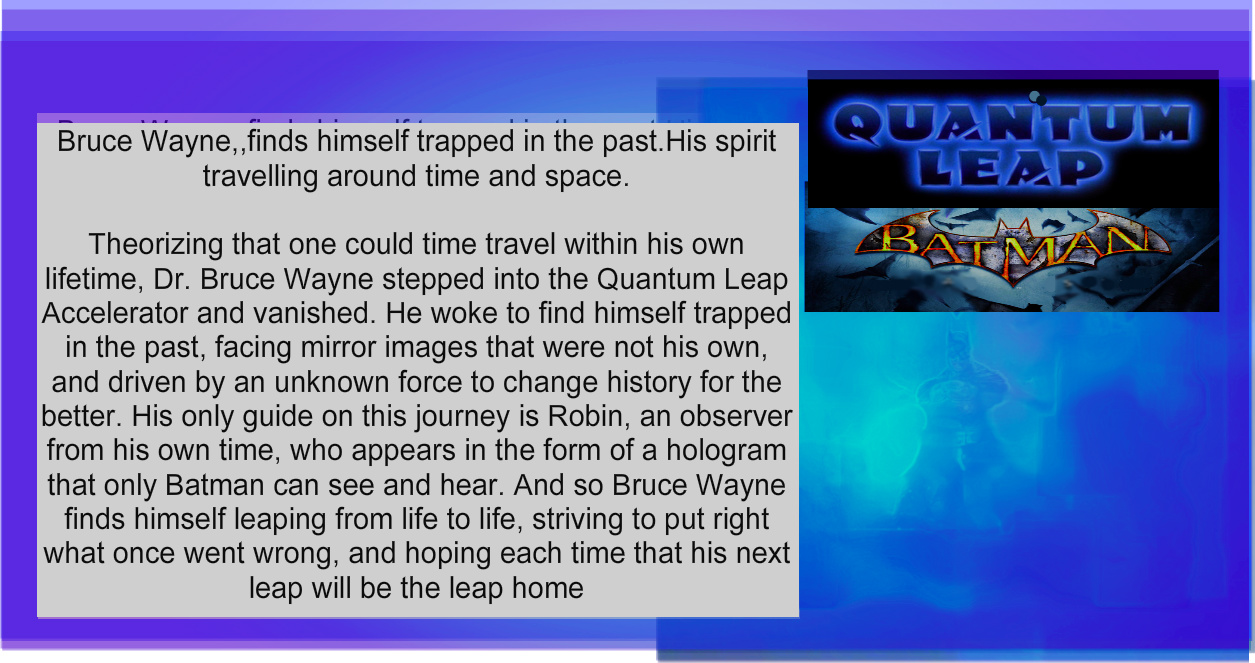 Bruce Wayne is back but he's still lost in time -- it's sort of like "The Dark Knight" meets "Land of the Lost" but, well, hopefully not just like that.Actually it's Batman meer Land of the Lost and Quantum Leap,but I don't you news guys to be that intelligent.

Here's a first look at issue No. 1 of "Batman: The Return of Bruce Wayne," by writer Grant Morrison and artist Chris Sprouse (with inks by Karl Story), the first in a six-issue series that will feature a different artist for each issue. I'm a big fan of Sprouse's polished style. Here are some of the interior pages...

For those of you not keeping track, Wayne is believed to be dead and his old sidekick, Dick Grayson, has assumed his cowl. He is struggling to reconcile his place in the Batman legacy -- and also trying to deal with his grief, the new wild child wearing the Robin costume and, of course, all the madness that is Gotham City. Good stuff from the always interesting mind of Morrison.If you say so-I don't.

Meanwhile, Wayne is in the past trying to get back to the future -- which is the present.trying to correct things that went originally wrong,hoping to find the correct..leap...home.

Got that? This issue goes on sale May 12. You can read more about this series over at the DC Comics' The Source blog.

Write the second section of your article here.
Retrieved from "https://mavericuniverse.fandom.com/wiki/Bruce_Wayne_Quantum_Leap?oldid=6206"
Community content is available under CC-BY-SA unless otherwise noted.