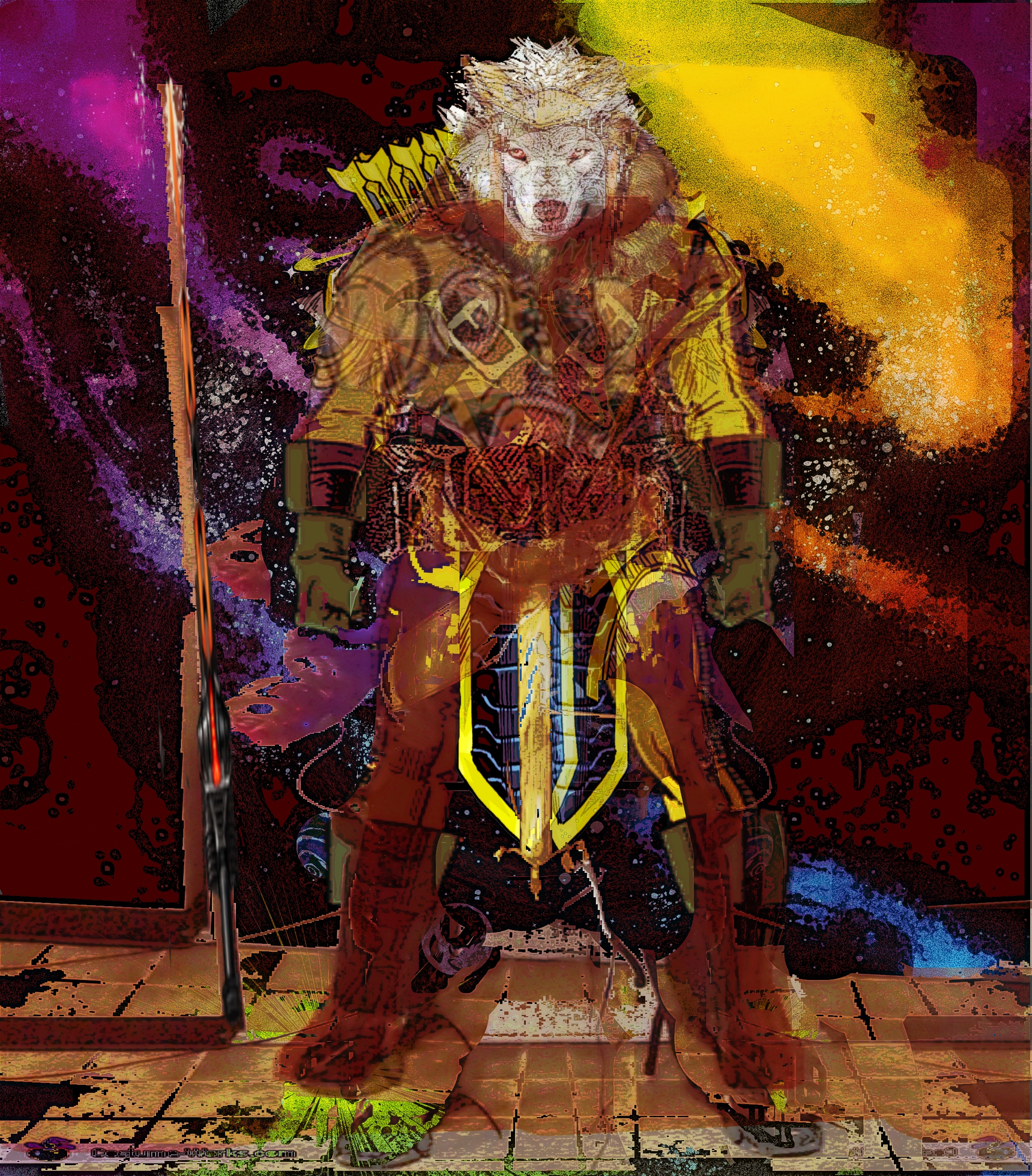 Khanaris Rhex is is of semi anthropoid species known as the Delta Nhorlax-a colony of the Original Nhorlax species.Rhex a skilled pilot and astronaut and is experienced in hand-to-hand combat and a variety of weapons.He is the commander of Delta Nhorlax Commandoes,situated aboard the HMSS Star-Pheonix.

| BaseOfOperations        = Mobile in the Milky galaxy on the starship, HMS Star Pheonix

Khanaris Rhex possesses both his human intellect and the Khanaris Rhex’sbody. He has cosmic powers, the full extent of which is yet unrevealed. He wears scale mail armor and uses a broadsword, dagger, short bow, and arrows.

Originally, Khanaris Rhex retains the basic features of a normal human alongside a generally simian physiology (e.g., elongated limbs and enlarged extremities) equivalent to that of a Great Ape. This mutation gives him superhuman strength, speed, reflexes, agility, flexibility, dexterity, coordination, balance, and endurance. He is equally dexterous with all four limbs; able to perform tasks with his feet or hands with equal ease. Because of his talents and training, Khanaris Rhex can outperform any Olympic-level athlete, contorting his body and performing aerial feats gracefully. His strength and dexterity allow him to climb vertical surfaces with just his hands and/or feet,[65] jump great distances [7] and survive falls that would kill any ordinary person.[66] He also possesses enhanced senses and can track people for great distances over open terrain [8] and his feet are sensitive enough to detect electronic signals (from bombs, listening devices, etc.) through solid walls and floors.[67]

Later, Khanaris Rhex  of brown fur covering his entire body and the enhancement of all of his existing abilities,aided by cybernetic implants especially his strength, and he also gained a nearly instantaneous healing factor.[68] The psychological impact of this first transformation caused Khanaris Rhex to experience short-term amnesia and also made it difficult for him to control his animalistic instincts, which would cause him to slip into an uncontrollable berserker rage during combat.[69] However, his body suddenly mutated again after a short time, changing his fur color from grey to black , returning his strength back to previous levels, and losing his healing factor.[14] He was also able to more easily control his animal instincts after this second mutation. Khanaris Rhex  was occasionally depicted with claws and fangs,Khanaris Rhex  reddish-brown. Khanaris Rhex to his simian physique, his intellect had stabilized and returned to his previous genius-level, and his strength had increased to superhuman proportions.[72]Khanaris Rhex’s fangs and claws became a consistent part of his appearance after this return to his "blue and furry" form..The result is a more feline appearance equivalent to that of a big cat. His strength, speed, stamina, sturdiness, and senses increase further with this change. He gains cat-like agility, flexibility, coordination, and balance, and all his senses are enhanced to twenty times that of a normal human being. In addition, Khanaris Rhex develops an accelerated healing factor that allows him to repair mild to moderate injuries within the span of a few hours.

Khanaris Rhex possesses a brilliant intellect. He is a world-renowned biochemist, having earned Ph.D.s in Biophysics and Genetics,[74] and is the man who cured the Legacy Virus. He frequently functions as both field medic and in-house physician for the X-Men, despite not technically having an MD. His intelligence and expertise in genetics rival that of Professor X, Moira McTaggert, and Kavita Rao. Despite this, he has never received a Nobel Prize or been elected to the United States National Academy of Sciences. A Renaissance man, Khanaris Rhex is well-versed in many fields including languages (fluent in English, German, French, Latin, Spanish, Japanese, Arabic, and Russian as well as the fictional language Latverian[19]), literature, philosophy,psychology, and sociology, history, art and art history, anthropology, linguistics, and music, as well as in political science and economics with a special affinity for science and technology and a penchant for quoting literary classics. His vast scientific knowledge ranges from theoretical physics, quantum mechanics, differential equations, nanotechnology, anatomy, biomedicine,analytical chemistry, electrical engineering, and mechanical engineering to the construction of a hyper-magnetic device. An electronics expert, he often repairs Cerebro and makes upgrades to the Danger Room settings. He has made several deus ex machina devices on par with Reed Richards, including a device that strips entities of cosmic powers.

Retrieved from "https://mavericuniverse.fandom.com/wiki/Colonel_Khanaris_Rhex?oldid=8951"
Community content is available under CC-BY-SA unless otherwise noted.