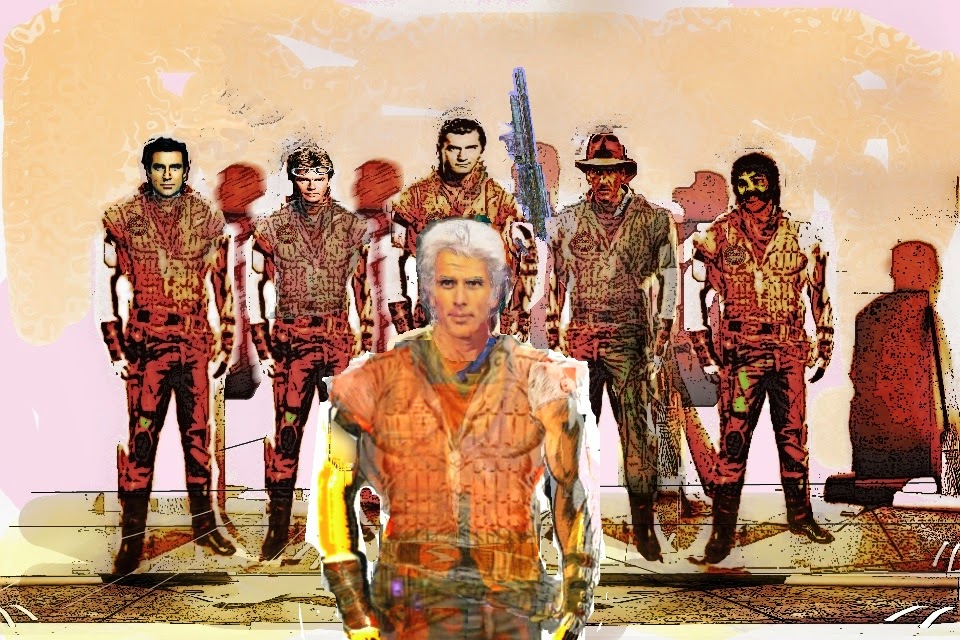 "Gideon Jonny" Fate,Junior is an 11-year-old American boy who lost his mother at an early age. Though unenthusiastic in his schooling, he is intelligent, brave, adventurous, and generally athletic with a proficiency in judo, scuba diving, and the handling of firearms. He takes on responsibility willingly, attending to his studies, and treating adults with respect. His voice was provided by actor Tim Matheson.

The Quests have a home compound in the Florida Keys (on the island of Palm Key), but their adventures take them all over the world. The Quest team travels the globe studying scientific mysteries, which generally end up being explained as the work of various bad guys. Such pursuits get them into scrapes with foes that range from espionage robots and electrical monsters to Egyptian mummies and pterosaurs. Although most menaces appeared in only one episode each, one recurring nemesis is known as Dr. Zin, an Asian criminal mastermind.[10] With yellow skin and a diabolical laugh, Zin was an example of the Yellow Peril villains common in Cold War-era fiction.[10][11] The voices of Dr. Zin and other assorted characters were done by Vic Perrin. Race's mysterious old flame, Jade, appears in two episodes, as do the characters of Corbin (an Intelligence One agent) and the Professor (a scientist colleague of Dr. Quest's). The 1993 made-for-TV feature Jonny's Golden Quest included in its plotline the concept that Race and Jade had been briefly married years earlier, but it also depicted Race and Hadji in place with the family at Mrs. Quest's death, in direct contradiction to explicit statements in the original series.

*Gideon Fate: A genius-level scientist and inventor with eidetic memory, Austin is constantly thinking, inventing ground-breaking technology and seeking answers to various mysteries and problems. One disadvantage to his vast intellect is that it isolated him from his peers from a very early age. As a result, he is awkward and uncomfortable in normal social situations, and very reclusive. His manner can be at times overly brusque, but he has a deep love of humanity.Edit

Austin is occasionally called in by local police to investigate baffling homicides, though he professes to not understand the motivation for murder. He founded the think tank Serendip, but he has no interest in managing its day-to-day affairs, preferring to spend most of his time engaged in a variety of experiments and investigations at his "workshop," a refurbished warehouse which serves as his home and laboratory.Edit

*Michelle "Mickey" Castle (played by Ashley Crow): Mickey seems an unlikely candidate to serve as Austin James' secretary, as she lacks any background in science and relies more on her instincts instead of logic. Though she initially finds Austin's genius and eccentricities intimidating (and infuriating), Mickey comes to enjoy the adventure of working for him. Similarly, while Austin has fired every other secretary foisted upon him by Serendip, he is soon captivated by Mickey's uncanny knack for providing unique observations that help him in his investigations.Edit

In his various incarnations, Tom Swift, usually in his teens, is inventive and science-minded, "Swift by name and swift by nature."[12] Tom is portrayed as a natural genius. In the earlier series, he is said to have had little formal education, the character originally modeled after such figures as Henry Ford,[13] Thomas Edison,[14] and aviation pioneer Glenn Curtiss.[14] In most of the five series, each book focuses on Tom's latest invention, and its role either in solving a problem or mystery, or in assisting Tom in feats of exploration or rescue. Often Tom must protect his new invention from villains "intent on stealing Tom's thunder or preventing his success,"[12] but Tom is always successful in the end.

Many of Tom Swift's fictional inventions either mirrored or presaged actual technological developments. Tom Swift Among the Diamond Makers (1911) was based on Charles Parsons's attempts to synthesize diamonds using electric current.[15] Tom Swift and His Photo Telephone was published in 1912. One source claims the process for sending photographs by telephone was not developed until 1925.[16] However, the first commercial wired telefax service was established in 1865, more than a decade before the invention of the telephone.

Tom Swift and His Wizard Camera (1912) features a portable movie camera, not invented until 1923 according to one source.[16] However, many early movie cameras were portable by one man, and a hand-held home movie camera for semi-professional work was designed in 1921 by Emanuel Goldberg.

One source[17] mentions Tom Swift and His Electric Locomotive (1922) was published two years before the Central Railroad of New Jersey placed the first diesel electric locomotive into service; however, the book refers to a purely electrical locomotive powered from overhead lines, of the sort which came into regular service in the late 19th century. The house on wheels that Tom invents in 1929's Tom Swift and His House on Wheels pre-dated the first house trailer by a year,[16] but post-dates the widespread use of Romany caravans for living by about a century. Tom Swift and His Diving Seacopter (1952) features a flying submarine similar to one planned by the United States Department of Defense four years later in 1956.[17] But this book was published more than a decade after the Soviet flying submarine project began and nearly 50 years after Jules Verne's 1904 novel Master of the World featured a flying submarine. Other inventions of Tom's have not come to pass, such as the device for silencing airplane engines that he invents in Tom Swift and His Magnetic Silencer (1941).[16]

*Howard Millhouse (played by Jon Cypher): As Serendip's long-suffering director, Howard constantly finds himself at wit's end, managing the company founded by Austin, and bankrolling his various experiments. Howard's attempts to draw Austin out of his warehouse to take a more active interest in his own company have only served to make Austin keep Serendip further at bay.Edit

Clark Savage, Sr was the father of Doc Savage Edit

The elder Savage became a widower shortly after his son's birth, and subsequently arranged for his son to be trained by teams of experts, from infancy, with a view to inculculating in the child near-superhuman strength and intelligence - notably, with little female contact.

A number of scholars have noted the similarity between the Savages and the protagonists of the novel The Savage Gentleman by Philip Wylie, published after the events of The Man of Bronze but before any Doc Savage adventures came out. In Wylie's novel, a mysognistic newspaper publisher named Stone deliberately shipwrecks himself and his infant son, in order to bring up the child as the perfect newspaperman and late-Victorian gentleman.

In Tarzan Alive, Philip José Farmer identifies the elder Savage with James Wilder, the illegitimate son of the Duke of Holdernesse or Greyminster (i.e. the sixth Duke of Greystoke). Savage's baptismal name is given as "James Clarke Wildman", and his mother is identified as Patricia Clarke Wildman. Farmer also names Savage's wife - Doc Savage's mother - as Arronaxe Larsen. Although neither Tarzan Alive nor Doc Savage: His Apocalyptic Life make any reference to The Savage Gentleman, it is interesting to note that in Wylie's book Stone's bizarre behaviour is the direct result of his being abandoned by his wife, Nellie Larsen.

Farmer inserted references to the adventures of Clark Savage, Sr.

Alexander Richard Fate, Sr. is identified as the son of Richard Henry Fate occasionally cited as the founder of Fate Industries,Inc.

Arthur C. Sippo's article Further Thoughts on the Doc Savage Chronology gives considerable thought to the life of Doc's father - research continued in his blog. Both he and Brad Mengel (in the latter's article What's in a Name?) give thought to reconciling Farmer's geneaology with Doom Dynasty.

Write the second section of your page here.


Cite error: <ref> tags exist, but no <references/> tag was found
Retrieved from "https://mavericuniverse.fandom.com/wiki/Gideon_Fate_,Senior?oldid=10907"
Community content is available under CC-BY-SA unless otherwise noted.