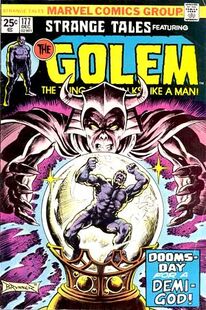 Add a photo to this gallery

Write the text of your arIn the Marvel Universe, there have been a number of fictional characters known as Golem. < Return to Religious Affiliation of Comics Book Characters Ghost #2, volume 2 (1995 series), published by Dark Horse, featured a Golem as an antagonist. From: "Jewish Comics Exhibit Notes" webpage, last updated 5 December 2004 (http://www.geocities.com/hadassahfink/comicexhnotes.htm; viewed 4 July 2007): Ghost #22 To help in trying to learn the secret behind her death, Ghost discovers a map that will tell her more about the city called Arcadia. However, the map is located in a tomb and is guarded by a Golem. She and her friends, Tiger and Focus, are almost defeated by the Golem. However, Focus manages to shoot the mystical token out of its body, returning it to its inanimate form.

From: "Jewish Comics Exhibit Notes" webpage, last updated 5 December 2004 (http://www.geocities.com/hadassahfink/comicexhnotes.htm; viewed 4 July 2007): Invaders #13 The captured Invaders super-team is saved by the Golem, who is actually Jacob Goldstein - the resident of the Warsaw Ghetto they had gone there to smuggle out. In the end, he decides to stay in the Ghetto with his people, hoping to help them out as much as he can. From: Mikel Midnight, "The Jewish Supers List" (http://blaklion.best.vwh.net/jew.html; viewed 4 July 2007): Marvel... Golem [Jacob Goldstein, cf. Invaders #12]

From: "Jewish Comics Exhibit Notes" webpage, last updated 5 December 2004 (http://www.geocities.com/hadassahfink/comicexhnotes.htm; viewed 4 July 2007): Saga of the Swamp Thing #11 Swamp Thing decides to help Harry Kay and his team to kill Karen Clancy, a paranormal who is trying to release "the Beast" and enable it to rule the mortal plane. Kay builds a golem to help them, but the golem ends up instinctively trying to kill Swamp Thing, attracted to him by Clancy's locket, which it was honing in on.

Stange Tales #177 The evil mystic Kaballa attempts to capture the Golem to use in his plans for world domination. The story begins with the retelling of a 16th century Yiddish legend about another golem.[3]

From: message posted 14 July 2004 on "The Bleat" blog website (http://www.lileks.com/bleats/archive/04/0704/071404.html; viewed 2 August 2007): Finally, I give you a comic that didn't last very long: [Scanned cover of Strange Tales #174, featuring the first appearance of "The Golem," the new cover-featured star of this comic book series.] A "Note from the Bullpen" said this was the first Jewish superhero in comics, but now we know that's not true. Ben Grimm (the Thing) is Jewish [link to: http://www.forward.com/issues/2002/02.07.26/fast1.html/]. Reed Richards? Episcopalian, I'd bet. Silver Surfer? Unitarian.

Detective Comics #632 Batman must stop a neo-Nazi gang, as well as the Golem that has been created to kill them. The Golem is inhabited by the spirit of a man who died during the Holocaust and who sees Nazis everywhere.[4]

Golem is a humanoid creature that was made in the sixteenth century by Judah Loew Ben Bezalel. It was made from purple stone or clay and protected the Jewish people from persecutors in Prague. In recent years it was reanimated by Professor Abraham Adamson’s life force as Abrahams died. Golem is currently a member of S.H.I.E.L.D.’s Howling Commandos Monster Force.

Golem is 8' tall and has superhuman strength which it drew from the land as long as it is in contact with the Earth. Template:-

Jacob Goldstein, the brother of the Blue Bullet, was a resident of the Jewish ghetto of Warsaw, Poland, during World War II. He mystically transformed himself into a Golem in order to fight the Nazis. He assisted the Invaders when his brother was kidnapped by Doctor Death.Template:Issue

In Golem form, Jacob was hulky humanoid of 3 meters height. His skin was hard as stone, giving him a good degree of invulnerability. His strength was greater than Captain America's but less than Namor's. Template:-

Template:Superherobox Dennis Golembuski was the grandson of a Polish freedom fighter who immigrated to America. Dennis may or may not have killed a man at the age of eight. He spent some time working as an underboss for Kingpin, but quit. He began to work for a mysterious new master. Later he had Mosh brought to him for robbing a liquor store under his "protection". Mosh refused to hand over a percentage of his take from the robbery. So Golem and his assistant Madame Rapier kill Mosh. He recrutied the Constrictor, Shocker and Jack O'Lantern to help protect a batch of "bloodstones". After the Hood arrived and stole half the diamonds, he gave Madam Rapier a list of pawn shops for them to scout, in case Hood tried to sell them. Hood arrived at the Golem's office and asking for a cut of the diamonds if he returned the rest undamaged. Golem agreed but after the Hood left, told Rapier to kill the thief at their rendezvous. After the Hood double-crossed Rapier, knowing she planned to double-cross him, she was killed in a hail of police gunfire. The Hood confronted Jack O'Lantern and the other super villains, he handed the diamonds over to them, telling them to tell Golem to just leave him alone. After they reported back to him, he promised that nothing was ended between him and the Hood.

Dennis apparently possesses no powers beyond those of a normal man his age.


Cite error: <ref> tags exist, but no <references/> tag was found
Retrieved from "https://mavericuniverse.fandom.com/wiki/Golem?oldid=10103"
Community content is available under CC-BY-SA unless otherwise noted.