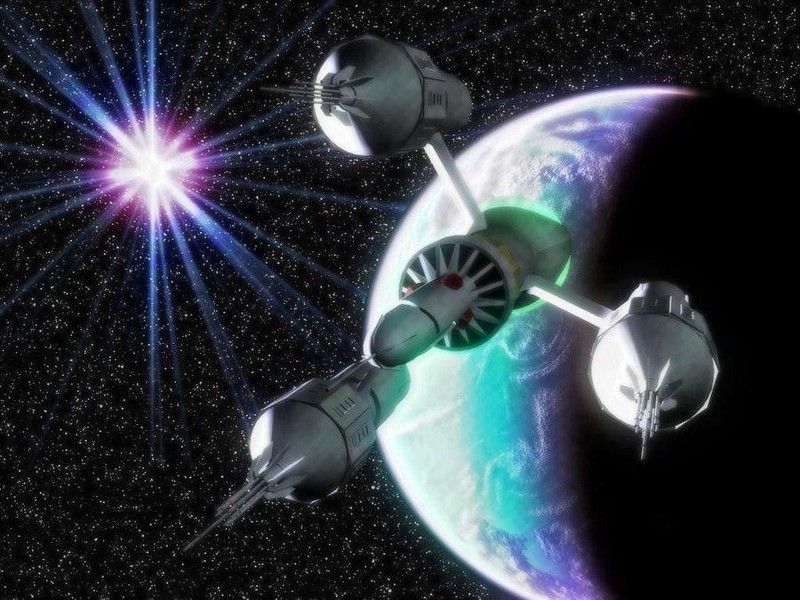 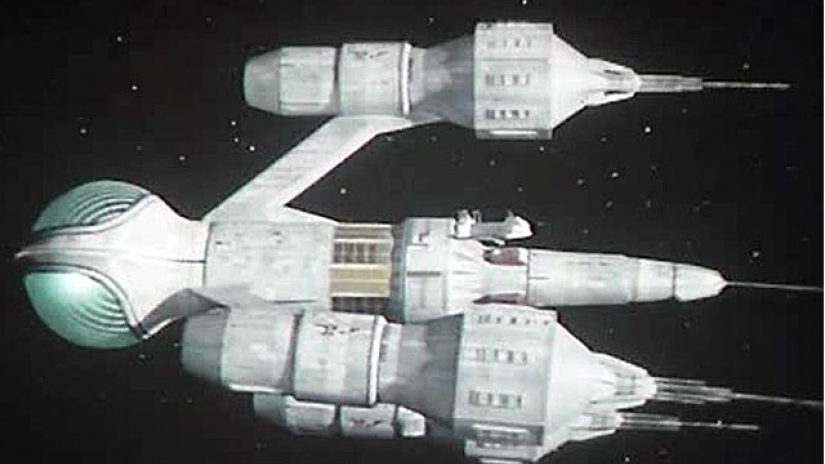 This article needs to be updated.

All information needs to be properly sourced

These omissions are so great that the article's factual accuracy has been compromised. Check out the discussion page and revision history for further clues about what needs to be updated in this article.

The Liberator was a powerful spacecraft originally constructed by the System. It was later found and taken over by Roj Blake and his followers who used it in their struggle against the Federation. The System designated the ship Deep Space Vehicle 2. The name Liberator was subconsciously given to it by Jenna but accepted by the ship's computers.

The Liberator was found drifting parallel to the London after a battle. Leylan reckoned that the battle involved "two fleets, maybe more".

An initial boarding was made by Wallace and Teague, who broke contact without explanation, as did a third man, Krell, sent afterwards to investigate. Blake, Avon and Jenna were then sent across, as they were condemned prisoners and were thus expendable. They discovered the ship was apparently abandoned but protected by a sphere which used the intruders' memories to lure them into making (fatal) contact with them. Blake's knowledge of his altered memories made him less susceptible to the sphere and he destroyed it. He at once decided to take the ship and disconnected it from the London, although not after a struggle in which he was wounded and Raiker killed. (A: Space Fall)

Liberator under attack by the System. (B: Redemption)

The Liberator followed the London to Cygnus Alpha (A: Cygnus Alpha) before travelling to Saurian Major, the two planets where Blake recruited the rest of his initial crew. (A: Time Squad)

Shortly after leaving the planet Aristo, the Liberator came under attack from alien vessels, its own systems shutting down or becoming actively hostile towards the crew. It became apparent that the original owners of the craft were reclaiming their property. The ship was taken to the home of the System, a giant space station, where Blake was interrogated. However, with the help of Orac's interference in the System's programming, Blake and the others were able to escape. The System launched another DSV-class ship to pursue them but it was destroyed by Orac.

Blake and later Avon commanded the Liberator, firstly in search of Star One and later for a permanent base of operations. It was also the first ship to engage the invading forces during the Intergalactic War. The Federation persisted in attempting to capture the vessel intact.

Avon was eventually lured to the artificial planet Terminal by a cryptic signal, but the flightpath of the ship took it through a cloud of fluidic particles in space. The particles coated the hull, disabling the sensors there, and spread through the systems of the Liberator like a disease, apparently feeding on the material of the ship and appearing as a thick green-brown slime. The slime caused initially superficial but widespread damage, beyond the ability of the self-repair systems to neutralise. Shortly afterwards Servalan finally captured the ship but was unaware of its compromised state. Upon commanding her crew to go to maximum power she found the vessel disintegrating around her, to the point where one of the nacelles detached. The Liberator exploded immediately afterwards.

Blake and Avon's first impressions of the ship were that the technology was more than simply advanced, being in fact conceptually alien to them. All systems were self-regenerating and intrinsically computer-controlled. It was incredibly difficult to operate the ship without the computer systems' support. [source needed]

Zen was the main computer of the ship. (A: Cygnus Alpha)

The Liberator drew its power from seven self-regenerating energy banks. One of the ship's few weaknesses was the occasional need to cease energy expenditure to allow the banks to replenish themselves. Running at full power the banks would be exhausted in two hours.

The maximum speed of the Liberator was Standard by Twelve. The exact nature of the drive system was never revealed, but only a ship with photonic stardrive could go faster. Avon speculated the ship might use 'negative hyperspace' while Blake suggested it might cross the 'antimatter interface' - neither suggestion was ever elaborated upon.

The main weapons were neutron blasters, which required a flare shield to be engaged in order to protect the crew. The ship's planetary attack weapons utilised plasma bolts. On one occasion Vila attempted to launch "seekers".

The Liberator could project a force wall, although doing so for extended periods was a considerable drain on the energy banks. As mentioned above all systems were self-regenerating and when discovered the flight deck was protected by a robotic guard system.

Teleport back up Cygnus Alpha-1

The ship had the first working teleport system encountered by humans, based on the use of the element aquitar. The crew usually teleported down wearing a teleport bracelet which allowed communication with the ship and teleport retrieval.

The ship's hull was composed of herculanium and incorporated multiple holds. The ship also contained a surgical and medical unit, a strongroom holding vast wealth (roughly '300 million credits' according to Jenna), a very extensive wardrobe section, and multiple escape pods. It had a recycling system and also sufficient food supplies to last one man 1000 years.

Retrieved from "https://mavericuniverse.fandom.com/wiki/Liberator_Blake_Seven?oldid=11247"
Community content is available under CC-BY-SA unless otherwise noted.