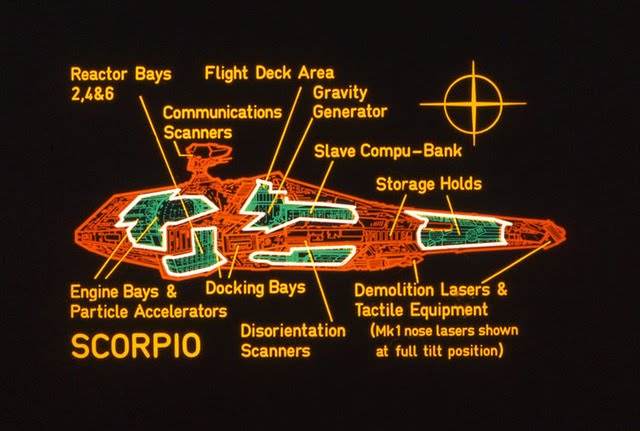 The Scorpio was described by Tarrant as "a Wanderer class planet hopper, Mark II by the look of it - obsolete but functional". It belonged to Dorian until acquired by Avon. Its speed at acquisition was unstated but once fitted with the photonic drive it could make at least Time Distort 12. The ship was generally under the control of the Slave computer, designed and installed by Dorian. It was also fitted with a teleport facility, installed by Dorian and perfected by Avon. Like most ships of this type, only the main deck was pressurized in flight. (D: Rescue)

Scorpio on the surface of Terminal. (D: Rescue)

Scorpio was taken by Avon and his crew to Helotrix, Caspar, Bucol-2, Pharos, Domo, Mecron II, Virn, Zerok, Beta 5, Malodar, Betafarl and Gauda Prime. Because of the teleport, landings were rarely made, and the ship was only seen to touch down on Terminal, Xenon, Caspar, and Betafarl. A landing was also made on Beta 5. Final touchdown was on Gauda Prime, where the ship broke in two on crash-landing.

Scorpio suffered damage in Stardrive, where it grazed an asteroid when trying to enter the Altern system, holing the main drive chamber as a result, and in Animals when attacked by pursuit ships above Bucol-2, suffering damage to the main detectors and AntiGrav Gyros. Control of the ship was lost in Power, when Pella briefly hijacked it, and Headhunter, where all systems came under the influence of Muller's android.

Orbital altitudes were mentioned twice: in Traitor the ship took up position 40 miles above Helotrix, and initial orbit over Malodar was 10 miles up.

Retrieved from "https://mavericuniverse.fandom.com/wiki/Scorpio_Blake_Seven?oldid=11249"
Community content is available under CC-BY-SA unless otherwise noted.