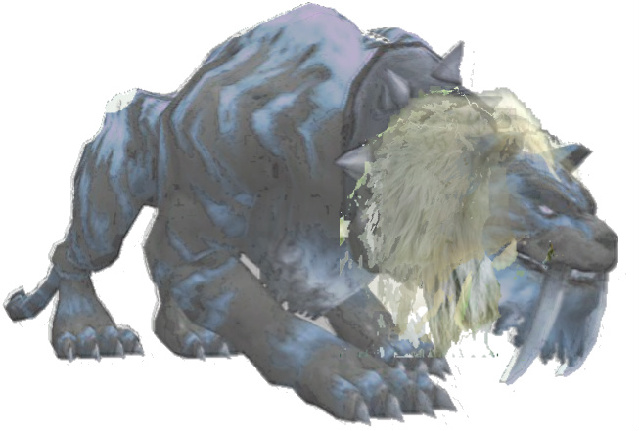 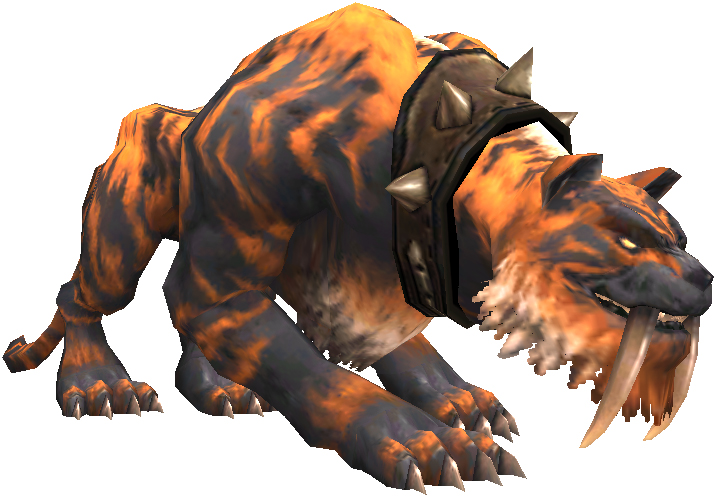 Shakhorja serves as a companion to Toreus Rhann, to whom he is attached as a dog is to its master, sometimes hunting for him and at other times fighting by his side, rescuing him from peril, or protecting his friends or allies from danger.He is the son of Shakhora and Shakhira sup class="reference" id="cite_ref-0" style="line-height: 1em; font-weight: normal; font-style: normal; ">[1]</sup> nephew of [1], mate of[2], and father of [3]. He has silvery white fur with blue sotripes and when he grows into an adult, he has an white mane.

Shakhorja was born in the Pangea on the dysonsphere known as Terra-Prime. While still a cub'Shakhorja was horned with a human Prince Toreus Rhann'junior)) while a hunters training mission., and the two became companions. Shakhorja protected the boy as he grew to adulthood, and eventually took on the name r, which means "Shakhorja was brought to near-human intelligence due to exposure to genetic engineering 'like all of his species.

Shakhorja helps Prince Toreus battle many enemies. For example, they confront '[[Ku and '. This particular battle resulted in El Tigre mentally controlling for a time, causing him to attack . El lost control before any serious injuries happened. The assistance of Antillis Sojat was vital in rescuing Zabu's mind.< Shakhorja teams up with the Thuvian Rangers to root out villains in the Crescent Land.

| Equipment = | Transportation = | Weapons = Large fangs and sharp claws on all four paws.Shakhorja,also possesses a spike tail,that can extended and enclosed at will.with deadly sharped spike at the end.

Shakhorja,like all his species was brought to near-human intelligence due to exposure to Capronean and Atlantean crossbreeding with ancient,intelligent lions and tigers species.] He is a Lion, but he talks and interacts with humans. Talking creatures are a common theme in mythology and folk tales, as well as children's literature. Fictional talking creatures often are anthropomorphic, possessing human-like qualities but appearing as a creature. The usage of talking creatures enable storytellers to combine the basic characteristics of the creature with human behavior, to apply metaphor, and to entertain children. There are a number of alleged real-life talking creatures.

Aslan, the "Great Lion," is the central character in The Chronicles of Narnia, a series of seven fantasy novels for children written by C. S. Lewis. He is the eponymous lion of The Lion, the Witch and the Wardrobe, and his role in Narnia is developed throughout the remaining books. He is also the only character to appear in all seven books of the series. He is depicted as a talking lion, the King of Beasts, son of the Emperor-Over-the-Sea; a wise, compassionate, magical authority (both temporal and spiritual); mysterious and benevolent guide to the human children who visit; guardian and saviour of Narnia. The author, C. S. Lewis, described Aslan as an alternative version of Christ, that is, as the form in which Christ might have appeared in a fantasy world. Aslan is Turkish for "lion" [2] and was also used as a title by Seljuq and Ottoman rulers. Throughout the series, it is stated that Aslan is "not a tame lion," since, despite his gentle and loving nature, he is powerful and can be dangerous. He has many followers, which include vast numbers of Talking Beasts, Centaurs, Fauns, Dryads, Dwarfs, Satyrs, Naiads, Hamadryads, Mermaids, Silvans, Unicorns, and Winged Horses. Lewis often capitalises the word lion, since, at least partially, he represents Jesus.[3]

Lura is half of all females with names, and the only one with any emotional depth! This is a personal favorite book of mine that I first read as a teenager. Its story of a young man exploring a post-apocalyptic world of ruined cities and beast-things was fascinating. (It also reminded me sometimes of a comicbook series that I read in the some era called "Kamandi, the Last Boy on Earth.").Strangely,about this I discovered Kamandi and read that.The only problems after a time Kamandi got stuck a rutt and evolved beyond the basic premised freely stolen the Planet of the Apes movies.So Kamandi,only was a luke warm coonection to Captain Toreus;Warrior 2250.A.D.,

Near-human intelligence due to genetic manipulation caused by both Atlantean and Capronean intervention." Template:Citation

The species of Smilodon were among the largest felids ever to live; the heaviest specimens of the massively built carnivore S. populator may have exceeded Template:Convert.[1]

A fully-grown Smilodon weighed approximately Template:Convert, depending on species. It had a short tail, powerful legs, muscular neck and long canines. Smilodon was more robustly built than any modern cat, comparable to a bear.

The lumbar region of the back was proportionally short, and the lower limbs were shortened relative to the upper limbs in comparison with modern pantherine cats, suggesting that Smilodon was not built for speed.However,Shakhorja,being more lion like is built for speed The largest species, the South American S. populator, had higher shoulders than hips and a back that sloped downwards, superficially recalling the shape of a hyena, in contrast to the level-backed appearance of S. fatalis, which was more like that of modern cats. However, while its front limbs were relatively long, their proportions were extremely robust and the forearm was shorter relative to the upper arm bone than in modern big cats, and proportionally even shorter than in S. fatalis. This indicates that these front limbs were designed for power rather than fast running, and S. populator would have had immense strength in its forequarters.

Smilodon had relatively shorter and more massive limbs than other felines. It had well developed flexors and extensors in its forepaws,Template:Citation needed which enabled it to pull down large prey.[2] The back limbs had powerfully built adductor muscles which might have helped the cat's stability when wrestling with prey. Like most cats, its claws were retractable.

Smilodon is most famous for its relatively long canines, which are the longest found in the saber-toothed cats, at about Template:Convert long in the largest species Smilodon populator. These canine teeth were fragile and could not have bitten into bone; thus, these cats did not use their long teeth while taking down prey, due to the risk of breaking them. Only when their prey was totally subdued did they use their teeth to simultaneously sever the blood supply and strangle the windpipe, instantly killing the prey.Template:Citation needed Despite being more powerfully built than other large cats, Smilodon actually had a weaker bite. Modern big cats have more pronounced zygomatic arches, while Smilodon had smaller zygomatic arches which restricted the thickness and therefore power of the temporalis muscles, and thus reduced Smilodon’s bite force. Analysis of its narrow jaws indicates that it could produce a bite only a third as strong as that of a lion.[3] There seems to a be a general rule that the saber-toothed cats with the largest canines had proportionally weaker bites. However, analyses of canine bending strength (the ability of the canine teeth to resist bending forces without breaking) and bite forces indicate that saber-toothed cats' teeth were stronger relative to the bite force than those of modern "big cats".[4] In addition, Smilodon could open its jaws 120 degrees, whereas the lion's gape is limited to 60 degrees.[5] It has been suggested that Smilodon's smaller temporalis muscles (controlling much of the bite force) were not used in the killing of prey; rather, Smilodon stretched its jaws around the throat and pressed its canines into the prey with the use of its immense neck and forelimb muscles. The penetration was the result of the neck flexors instead of the jaw muscles, according to this hypothesis.
Cite error: <ref> tags exist, but no <references/> tag was found
Retrieved from "https://mavericuniverse.fandom.com/wiki/Shakhorja?oldid=10099"
Community content is available under CC-BY-SA unless otherwise noted.