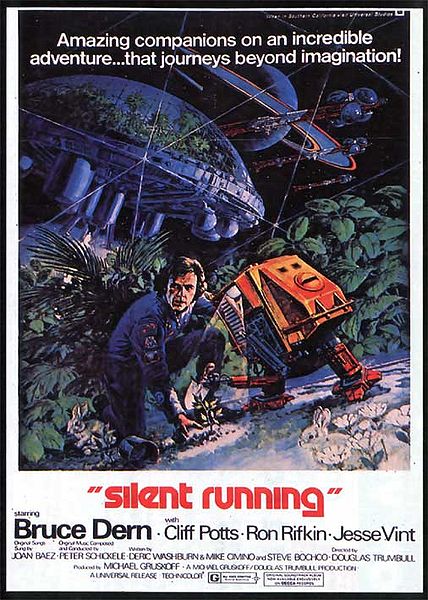 Silent Running depicts a future in which all plant life on Earth has been made extinct, except for a few specimens preserved in a fleet of space-borne freight ships converted to carry greenhouse domes. When orders come from Earth to jettison and destroy the domes, the botanist aboard the greenhouse-ship 'Valley Forge' (Bruce Dern) rebels, and eventually opts instead to send the last dome into deep space to save the remaining plants and animals. The film costars Cliff Potts, Ron Rifkin and Jesse Vint.

==Plot summary==
The movie depicts a future in which all plant life on Earth has been made extinct. Only a few specimens have been preserved just outside the orbit of Saturn, in enormous, greenhouse-like geodesic domes attached to a fleet of American Airlines "Space Freighters".  Freeman Lowell (Bruce Dern) is one of four crewmen aboard the Valley Forge, one of the 2,000 metre-long freighters, and is the resident botanist and ecologist who preserves the forests for their eventual return to Earth, and the reforestation of the planet. Lowell spends most of his time in the forests, cultivating the plant and animal life.<ref name="canby72"/>

When orders come from Earth to jettison and destroy the domes (with nuclear charges), and return the freighters to commercial service, Lowell opts instead to save the last remaining forests.  After four of the six domes on the Valley Forge are jettisoned and destroyed, Lowell kills one of his crewmates in a struggle, which leaves his right leg seriously injured. Nevertheless, he is able to prevent the destruction of one of the remaining domes.  Lowell traps the other two crewmen in the other remaining dome, which he then jettisons and destroys.  Enlisting the aid of the ship's three service robots (drones), which he eventually names Huey, Dewey, and Louie, Lowell stages a fake premature explosion as a ruse, and sends the Valley Forge careening away from the space freighter fleet, towards Saturn, in an attempt to hijack the ship and flee with the last forest dome. Injured and alone with the three drones, Lowell reprograms them to perform surgery on his leg.

Still in communication with the rest of the fleet, Lowell is informed that the Valley Forge is on a collision course with Saturn's rings, and there is nothing he can do to stop the catastrophic event. The ship will likely be destroyed.  With communications failing due to the distance now between the Valley Forge and the rest of the fleet, the ship passes through the rings of Saturn.  The three drones are outside the ship on maintenance duty, when Drone 3 (Louie) is blown away from the ship, leaving two remaining drones.  The ship, and the precious dome, emerge undamaged on the other side of the rings.

Now alone, Lowell and the drones set out into deep space to maintain the forest. With boredom and the lack of company building up, Lowell tries to make the drones more like individuals by teaching them to plant trees and play poker. When Lowell's conscience sets in, he instructs the drones to bury the crewman he killed in the dome. With thoughts of the human toll he has taken to save the last forest, Lowell is horrified when he realises that his forest is dying.  After weeks alone in space, the Berkshire, a sister ship, locates the freighter and informs Lowell that he must jettison the dome. Lowell realises that what was killing the forest was the lack of sunlight, and he wires up several banks of lights. Realising that his murders will be uncovered, Lowell jettisons the last dome to safety with Dewey, and arms nuclear charges to destroy himself, drone 2 'Huey' (who was damaged in a collision with Lowell's Odyssey cart earlier in the film and whom Lowell thought too damaged to remain in the dome with Dewey) and the "Valley Forge", thus ensuring the preservation of the last dome. The final scene shows a well-lit forest greenhouse drifting into deep space, with drone 1 (Dewey) tending to its care.

In an interview with Starlog magazine in the late 1970s, Douglas Trumbull revealed that the plot of the movie in the original version of the script was quite a bit different from what was actually filmed. In the original version, the Space Freighters were on permanent duty, carrying biological domes. When they are finally told to blow the domes and return to earth, it is because the freighters are going to be scrapped.

The Freeman Lowell character in the original version was an older, more curmudgeonly man who simply did not want to return to earth and be forced into retirement, so he steals the Valley Forge, and heads off into deep space. As in the filmed version, he reprograms the robots for some companionship, and the subplot involving the plants dying due to a lack of light was involved, but his main interest in the plants was simply as a means of extending his limited food supplies. In the second half of the film, he receives a signal from an alien ship, and decides to approach it, making humanity's first contact with aliens. The last part of the movie was a race between Lowell, who was trying to contact the aliens, and the human boarding party trying to re-take the ship. Finally, in desperation, Lowell detaches one of the domes with one of the robots aboard seconds before he is killed by the boarding party. The dome drifts off into deep space, where it is found by the aliens.

Trumbull had been involved with creating effects for 2001: A Space Odyssey. Director Stanley Kubrick wanted the "Stargate" sequence of that film to be centered around Saturn, but there were technical difficulties in getting the special effects for this sequence finished in the limited time frame. The Saturn idea was scrapped, and Kubrick substituted Jupiter instead. Trumbull developed the sequence after production, and it was recreated for Saturn in Silent Running.

The interiors were filmed aboard the decommissioned WW2 aircraft carrier USS Valley Forge (CV-45), which was docked at the Long Beach Naval Shipyard in Long Beach, California.  Shortly after filming was completed, the carrier was scrapped.  The forest environments were originally intended to be filmed in the Mitchell Park Domes in Milwaukee, Wisconsin, but the production budget forced the sequences to be shot in a newly-completed aircraft hangar in Van Nuys, California. Trumbull stated on the commentary accompanying the DVD release that the geodesic domes containing the last forests of Earth's future on the spaceship Valley Forge were based on the Missouri Botanical Garden Climatron dome.

There are three freighters seen in the film, the Valley Forge, the Berkshire and the Sequoia.  Five other ships that carried domes are also named, but do not appear on screen — they are the Yellowstone, Acadia, Blue Ridge, Glacier and Mojave. Each ship features a designation on the hull, which notes the area from which some of the flora and fauna samples were taken.  The Valley Forge is listed as "Bahia Honda Subtropical," indicating at least some specimens were taken from this area of the Florida Keys.

The model of the Valley Forge Space Freighter was 26 feet (8 m) long, and took six months to build from a combination of custom castings and the contents of approximately 800 prefabricated model aircraft or tank kits. After filming was completed, American Airlines expressed an interest in sending the model on the tour circuit, but this was not feasible due to the fragile nature of the model (in fact, during filming, pieces of the model kept falling away).  The ship was subsequently disassembled after several years sitting in Douglas Trumbull's personal storage facility. Several pieces, including the domes, wound up in the hands of collectors. Several domes survive, including one that now rests in the Science Fiction Museum and Hall of Fame in Seattle, Washington, and another which was sold at auction in 2008.

The three "drones" were played by four double-amputees,<ref name="canby72"/> an idea inspired by Johnny Eck, a sideshow performer of the early 20th century who had been born without lower limbs.Template:Fact The 20 pound (9 kg) "drone suits" were custom tailored for the different actors. The suits still exist, and are in Douglas Trumbull's personal collection.

==Influences in other works==
The Starlost television series re-used and expanded on the environmental dome models and some of the feeling of the interiors. The original Battlestar Galactica series used stock footage of the space freighters in several episodes. On that show, they were called "Agro Ships," and were the source of all the food in the rag-tag fleet. Initially there were three of them, but two were destroyed by the Cylons. In the current incarnation of Galactica, there is a comparable "Botanical Cruiser" located in the fleet. Like many ships designed for the new show, the Botanical Cruiser was clearly inspired by the earlier design.

British synthpop group Orchestral Manoeuvres in the Dark also better known as OMD has named a song on their 1983 album "Dazzle Ships" after the movie.

Carbon Based Lifeforms have named a song on their 2003 album "Hydroponic Garden" after the movie; on their 2006 album "World Of Sleepers" there is a song called "Photosynthesis" which features a sample from the movie ("What about the forests?!").

WALL-E Director Andrew Stanton said he was influenced by this film,<ref>Template:Cite news</ref> as was Duncan Jones in making his feature debut, Moon.<ref>==Further reading==

Retrieved from "https://mavericuniverse.fandom.com/wiki/Silent_Running?oldid=5329"
Community content is available under CC-BY-SA unless otherwise noted.