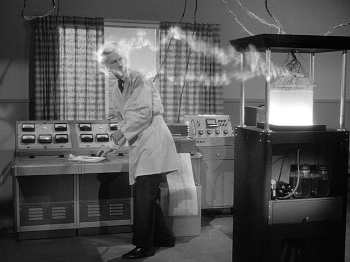 Write the text of your article here!

"The Brain of Colonel Barham" (original title: The Brain of Donald Duncan) is an episode of the original The Outer Limits television show. It first aired on 2 January 1965, during the second season.

"With the world growing more crowded, the great powers strive to conquer other planets. The race is on. The interplanetary sea has been charted; the first caravelle of space is being constructed. Who will get there first? Who will be the new Columbus?"

The space race continues as the American military strives to be the first to successfully land a man on Mars. But the best candidate for the job, Col. Barham, is dying of an incurable ailment. His superiors--- General Pettit and Doctors Rahm and Hausner--- devise a plan in which they’ll extract his brain and create a cybernetic hybrid that will have the resilience of a machine but the quick, organic thinking of a human being, which will be sent to Mars and secure the United States’ lead in the Space Race. After his initial shock at the idea, Barham agrees.t is decided to separate his brain from his body and keep it alive, with neural implants connecting it to visual and audio input/output for the mission. His wife and an Air Force psychiatrist oppose the brain removal, fearing that the arrogant spaceman's brain won't adapt, making his death futile. But the Cold War space race takes precedence, so the experiment proceeds, despite eerie developments. agrees.

His wife, Jennifer, opposes the idea, much to his callous amusement. Theirs is a loveless marriage, but she’s stayed with him because of her strong aversion to the idea of divorce…. much to the chagrin of Major Douglas McKinnon, the psychologist assigned to monitor Barham’s mental and emotional state, who has fallen in love with her. The operation goes off without a hitch, and soon Barham’s mental capabilities grow beyond the project leaders’ wildest dreams. They seem all-too-willing to look the other way when his ego grows proportionally and he develops a god complex, paying no mind to McKinnon’s dire warnings. But without a body, the brain becomes extremely powerful and megalomaniacal.One of Barham’s new talents is the ability to emit an energy bolt that temporarily neutralizes free will. Angry that Jennifer refuses to visit him in his new mechanized state, Barham forces Ed Nichols (the technician assigned to maintain his complex systems) to attack her. McKinnon manages to intervene before she is hurt; however, his actions spur Barham into sending Dr. Rahm after him with a pistol.

McKinnon narrowly avoids getting blown away and pleads with General Pettit to terminate Barham. After Barham tells Pettit that he no longer recognizes his authority and that he’s assuming control of the project, Pettit agrees to pull the plug. Barham responds by holding Jennifer and McKinnon hostage, prompting Pettit to take the megalomaniac brain out from outside the window with a sniper rifle.

"Progress goes on. One experiment fails, but even out of failure valuable lessons are learned. A way will be found, someday, somehow. It always is."

Retrieved from "https://mavericuniverse.fandom.com/wiki/The_Brain_of_Colonel_Barham_Outer_Limits?oldid=10842"
Community content is available under CC-BY-SA unless otherwise noted.