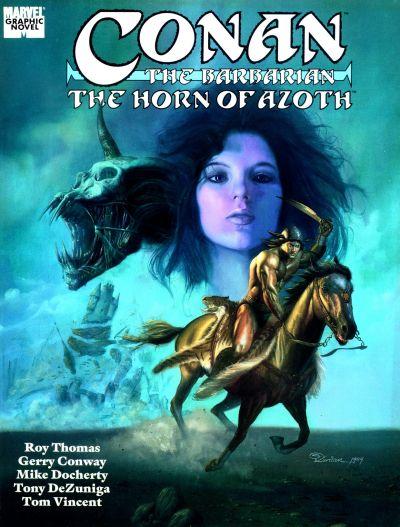 God of pain and hate.

he first section of your article here.

Write the second section of your article here.

e. Arnold has even been quoted as saying to Roy Thomas directly that he thought they should have used his script untouched. I believe the graphic novel is better than the CTD movie imho. Robert Jordan's novelization of the film is far superior to the film as well while we are at it.In the graphic novel it is insinuated that at the beginning the Subotai character is executed by Zamoran authorities for thievery (although I believe for some reason they used another name for the character, I still think the reference was to Subotai inasmuch as they refer to him as "the Hyrkanian"). After avenging his friend's death, a captured Conan is freed from a Shadizar jail and hired for the mission to retrieve the Horn of Azoth. Other differences include the lack of a Malak-like comedic sidekick, no Mako/Wizard, and I think the Bombaata/Zula characters were more or less intertwined into one black, female warrior who serves as the princess's bodyguard. Oh yeah, and instead of Taramis we get an evil male priest/king instead.

I think that's about it more or less if I'm correct...otherwise all is very much the same give or take a few other minor semantic changes like, for example Conan's battle with giant leeches in the bowels of the temple.

Overall, while better than what actually made it to the screen, I still thought even Thomas's script needed a lot of work to be made film-worthy. If they had used Jordan's novelization as a template it would have been an amazing and more than worthy sequel that most likely would have kept the franchise alive. I had always hoped at the time that perhaps the series would have continued using some of the other TOR Conan books as reference points for scripts, but alas...t'was another story.

If I am remembering correctly, the graphic novel is what Roy Thomas originally wrote for the screenplay? At any rate it is far superior to the movie.

Retrieved from "https://mavericuniverse.fandom.com/wiki/The_Horn_Of_Azoth?oldid=5848"
Community content is available under CC-BY-SA unless otherwise noted.