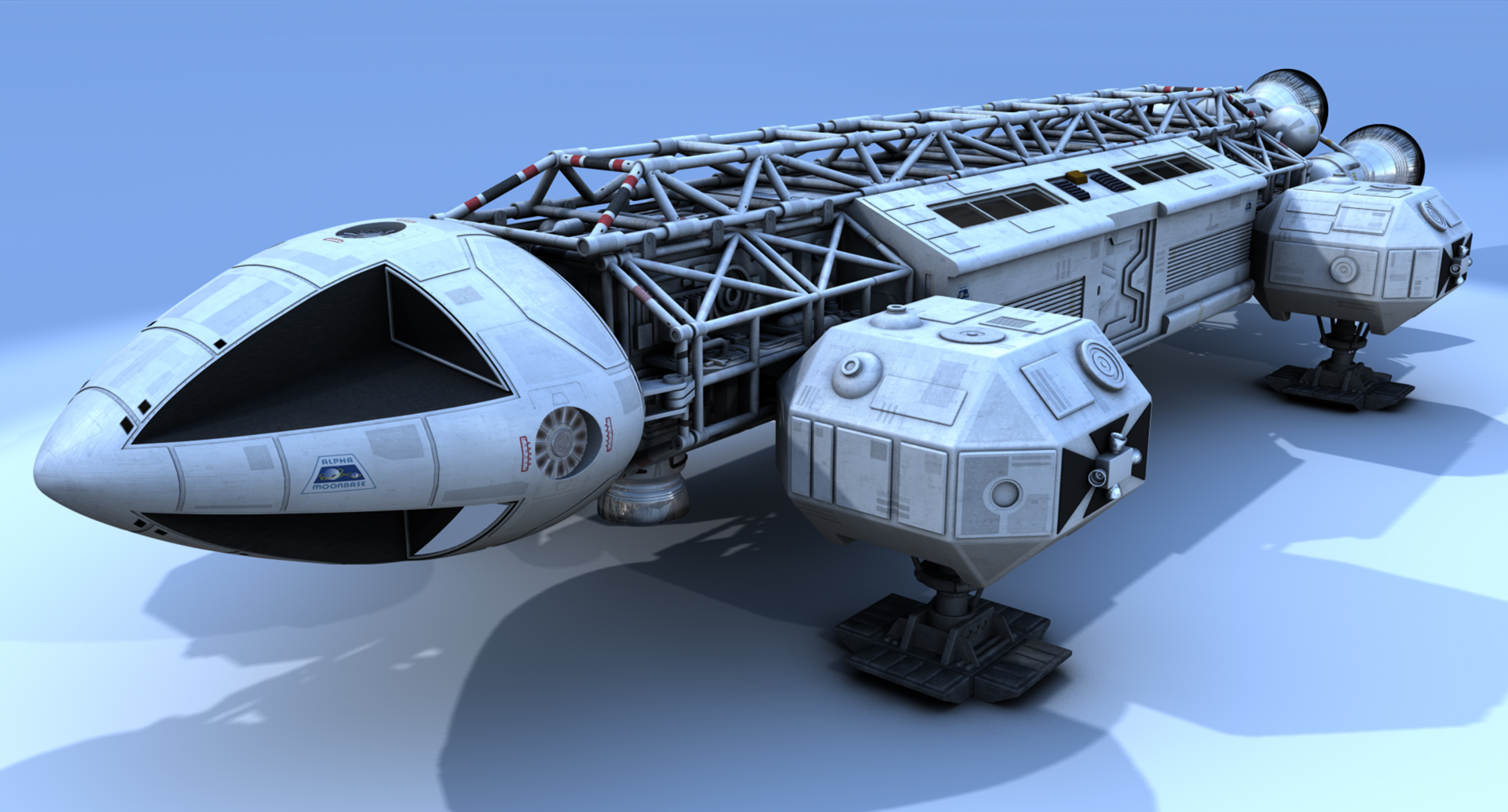 Fixed laser under the nose module. Extendable turret in front of centre section.[N 1]

The Eagle Transporter is the main mode of transport for the inhabitants of Moonbase Alpha.

The Eagle (designed by Brian Johnson) is the primary form of transportation for the inhabitants of Moonbase Alpha. A multipurpose craft, it is divided into three basic sections; the command module, the service pod, and the superstructure. Capable of speeds up to 23,700 miles per second, or 15% of the speed of light, it is powered by four nuclear fusion rockets, and carries carries fuel reserves for 48 hours of flight. There are 5 main types of Eagle Transporter

The Transporter Eagle, designated Type A, is fitted with the standard passenger pod and is capable of holding 8 passengers (up to 12 in an emergency), in addition to the pilot and co-pilot.[N 2] It is used for day to day transportation when special scientific equipment is not needed, and there is no anticipated danger.[1]

Looking very similar to the transporter pod Eagles, these are designated as Type C, and come equipped with various types of sensory devices for exploratory missions. They also contain a computer that can either be tied into Alpha's master computer or work independently.[1]

Identifiable by the bold red stripes on the pod, these Eagles are designated Type D, and have been adapted for field diagnosis and treatment of injury or disease that may be encountered on a planet's surface or in deep space. Manned by medical personnel, Rescue Eagles are equipped with mobile beds, patient-monitor units, and facilities for field surgery.[1]

Equipped with a cargo pod, the Freighter Eagle is designated Type B, and used for transporting supplies and equipment to exploration teams on a planet's surface, and for the return elements vital to Alpha's environmental and reprocessing systems. They can also be used as space-borne tankers for the refueling of Eagles with insufficient reserves for the trip back to Alpha.[1]

With a modified version of the passenger pod equipped to serve as a remote laboratory, this Eagle is designated Type E, and can be used to locate and refine crude minerals on the planets surface, eliminating the need to transport bulky raw ores back to Alpha. This pod also serves as a base for planetary-contact-and-survey teams. It can carry food and water and recycle air to support the team for several weeks.[1]

The Eagle can also accommodate one of several specialty modules, such as the winch platform used to disperse the nuclear waste canisters in Area 2. There is also an additional booster unit that can be added to the super-structure which can increase the range and power of the Eagle.

◾ June 2, 1992: The Eagle Transporter replaces the Falcon shuttle ◾ Nov 14, 1992: The WSC approves the construction of an Eagle production facility to be located beneath Moonbase Alpha

1.↑ The turret is normally only used when the Eagle is on the ground.[3] 2.↑ Some examples, such as the Eagle that delivered John Koenig to Moonbase in Breakaway, carry a stewardess in addition to the flight crew. 3.↑ This is either the Westinghouse Astronuclear Laboratory or the Westinghouse Advanced Energy Systems Division 4.↑ Possible reference to Maura Corporation in San Francisco

Community content is available under CC-BY-SA unless otherwise noted.

Retrieved from "https://mavericuniverse.fandom.com/wiki/Transport_Eagle_Space_1999?oldid=11254"
Community content is available under CC-BY-SA unless otherwise noted.