Start a Wiki
= War of the Colossal Beast| 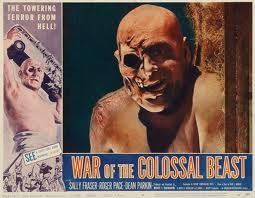 = }} War of the Colossal Beast is a 1958 black-and-white science fiction film, directed by Bert I. Gordon and produced by Carmel Productions and distributed by American International Pictures. It continued the storyline of the 1957 movie The Amazing Colossal Man, although it was not marketed as a direct sequel, and featured a different cast.[1] Both The Amazing Colossal Man and War of the Colossal Beast were later mocked on the television series Mystery Science Theater 3000.

Upon hearing of several recent robberies of food delivery trucks in Mexico, Joyce Manning, Army officer Lt. Col. Glenn Manning's sister (though in The Amazing Colossal Man, his fiance said he had no surviving family), becomes convinced that her brother survived his fall from the Boulder Dam at the end of the first film. Along with Army officer Major Mark Baird and scientist Dr. Carmichael, she goes to Mexico to look for him.  It is discovered that Manning, now grown to 60 feet tall after being exposed to plutonium radiation, survived his fall from the Boulder Dam at the end of the previous movie, but he has gone insane and part of his face was left disfigured following his confrontation with the Army there, turning him into a zombie-like creature.  Not only has the plutonium radiation mutated him into a 60 foot disfigured freak, it also has conferred other benefits; drastically reducing his vocabulary and diet - he now appears capable only of uttering simple variations on "aarrrgh" (although he does manage a single strangled "Joyce!" at the movie's end) and only eating loaves of bread (by the truck load). Manning is captured, drugged by the Army, taken back to America, but he again escapes and goes on a rampage through Los Angeles and Hollywood. Eventually, Joyce makes him snap to his senses and realizing what he has done, he kills himself by electrocution (somehow causing the movie to change from black and white to color for the final minute) on high-voltage power lines around the Griffith Observatory. The ending, involving electrocution, is almost exactly like the death of the 50-ft Woman.

Village of the GiantsEmpire of the AntsOne of Bert I. Gordon’s better films was The Amazing Colossal Man (1957), featuring Glenn Langan as a man turned into a giant by atomic radiation. War of the Colossal Beast was a sequel. The Amazing Colossal Man stood out above the rest of Bert I. Gordon’s cheap films and showed a modest degree of imagination. The same could not be said for War of the Colossal Beast, which is only sequel making by the numbers. Certainly, Colossal Beast is competently made as B science-fiction movies of this era go, has okay actors, is passably scripted, while Bert I. Gordon’s direction is pedestrian but adequate. It is all also a boring film. It is, for example, 20 minutes into this 69-minute movie before we get the first brief appearance of the Colossal Man. Gordon also cheats considerably in allowing a substantial chunk of the middle of the film to be taken up by flashbacks to the original events, which have simply been padded out with footage from The Amazing Colossal Man.

Furthermore, War of the Colossal Beast lacks the same frisson that The Amazing Colossal Man had as a story. Colossal Man was an archetypal 1950s plot of a man mutating into a giant and going on a rampage before being shot down by the military; War of the Colossal Beast far less interestingly involves a mystery (where we already know the answer to the identity of the monster) and then the Colossal Man’s capture and escape, before being shot down by the military all over again. It, for example, takes some 40 minutes of running time (most of which is taken up by the flashbacks to the original) before we get to the point of Manning’s capture. Moreover, the Colossal Man is on screen surprisingly little of the time – a few scenes during his capture, his breakout from the hangar and then the showdown at the Griffith Park Observatory. (Indeed, the Colossal Man appears more during the scenes taken from the original film than in the new scenes that have been shot here).In this one Glenn Manning,is disfigured.One side of his face is damaged-teeth exposed,scars and eye missing-sort gives a monsterous image,the producers were looking to the Colossal Man into the Colossal Beast,we can assume.Manning resembles another Manning decades later,in Marvel Comics Deathlok cyborg.You figure,if Manning could rapidly heal over night and grow new cells,he regrow a new eye and partions of his face.But he can't because you want to disguise the fact Glenn Langan is not playing the part,but another guy Dean Parkins. Despite all this,Glenn Manning dosen't appear much,even,you see,him poster grasping a bus.You expect more of him,like this. Even then, most of the climax takes place with him hiding behind foliage and only coming out at the end to be caught in a spotlight and then fry himself on the power lines. The weirdly film at least does turn to colour for these scenes of unknown reason.Maybe Bert I Gordon had pre existing color footage and simply wanted to use it or maybe felt it be shocking to the audiance to go from black and white to suddenly color.Even so,we see Glenn Manning destroyed and not simply eletrocuted,as would happen,one wonders if they another movie,would the Colossal Man suddenly survive-if as little explaination,as this movie.

Glenn Langan, who played the role in the original, is now replaced by Dean Parkin. One thing that War of the Colossal Beast does is to give the Colossal Man/Beast a much more effective makeup job with a half scarred face. There are some occasionally good effects – like the first appearance of the Colossal Beast behind the side of the mountain or the shots with him tied up in a hangar – but other effects shots betray thick and obvious matte lines and are down around the usual level of Bert I. Gordon’s effects. In some shots, Dean Parkin is simply double-exposed over the hangar and airfield tower.

They track Glen down where he is hiding in the Mexican desert, raiding passing trucks for food. The military manage to capture him using a truckload of drugged bread. He is placed in an airplane hangar in Los Angeles where scientists try to discover if his mind has been destroyed altogether or he can still be reached. However, Glen manages to escape from the hangar and goes on a rampage through the city.Director, producer and fairly much one-man band Bert I. Gordon had modest success in the 1950s and 60s with a series of giant bug and big/little people films, all made on pitifully small budgets. These include The Cyclops (1957), The Beginning of the End (1957), Attack of the Puppet People (1958),  (1958),  (1965), as well as the later likes of The Food of the Gods (1976) and  (1977). The constant recurrence of size themes in his films and the coincidence of his initials had Gordon nicknamed Mr B.I.G.

Retrieved from "https://mavericuniverse.fandom.com/wiki/War_of_the_Colossal_Beast?oldid=8283"
Community content is available under CC-BY-SA unless otherwise noted.